The End of a Chapter - The Northward Push Chapter

The Northward Push Chapter has come to an end and it's time to start planning our next chapter.  What will it be?  Lora and I have always found it exciting to plan the next chapter, but before we go there here are some highlights from our Northward Push adventure.

The idea of the Northward Push started when Lora and I decided to attend the very first RVillage rally called RVillage Rally One - The Connected Road.  It was being held in Elkhart, Indiana.  Yikes!  Neither of us had been that far north in a long, long time and never in our coach, Freya.  We were currently docked in St. Augustine Beach, Florida where we had wintered.  We decided to give ourselves a little over a month to get from St. Augustine Beach to Elkhart.  This was the birth of the Chapter - Northward Push.

Freya parked right in front of the rally tent at RVillage Rally One, The Connected Road - Elkhart, IN

After Tropical Palms RV Resort, we started our push north with our first stop at Freightliner in Ocala, Florida where we had our annual maintenance done on Freya.  Ouch!  Diesel pushers aren't cheap to maintain.  We had all of her maintenance performed, as well as all the generator maintenance done.  Exciting stuff I know ... but it was part of the journey.

Also in this Chapter of our journey, we boondocked for the very first time.  Yikers!  If you don't know, boondocking is when you are camping for the night (or longer) with NO hookups (no water, no electric & no sewer hookups).  It sounds a bit intimidating and we were nervous that first night.  However, these machines are built for this and have everything you need to be off-grid.  Our first boondocking was at the Tallahassee Auto Museum in Tallahassee, Florida where they allowed us to overnight in their grass field outside of the museum.  The folks at the museum were great and we repaid them by touring the museum which was a fantastic experience.  It turns out that boondocking was not only easy, it was fun and we looked forward to our next time ... which was the very next night.  We headed further north and west to boondock for the night at the winery Hodges Vineyards and Winery in Camp Hill, Alabama.  We bought way too much wine and when they closed that evening, they left the entire place to just us :-).

A tiny example of the exhibits at Tallahassee Automobile Museum

The view from the patio - Hodges Vineyards, Camp Hill, AL

Along our journey we discovered many micro breweries - some good, some great, and some, well, not so good.  In Chattanooga, Tennessee we found Moccasin Bend Brewing that had one of the best atmospheres.  It was cool, laid back, and dog friendly.

In Chattanooga, Tennessee we also found the worst micro brewery, Terminal BrewHouse that we have ever visited.  They actually served us stale beer.  Booo.  We also revisited the Smoky Mountain Brewery in Gatlinburg, Tennessee, our all time favorite brewery for great beer and great atmosphere.

Our favorite location so far in our travels - Gatlinburg, TN

We discovered a brewery and winery in Morrow, Ohio called Valley Vineyards & Brewery where we also boondocked for the night.  When we arrived, it was Mother's Day and the place was packed for their Mother's Day dinner.

Further north, we also found our new favorite micro brew at Iechyd Da in Elkhart, Indiana (pronounced yakki-da).  This place was great!  They had the most unique serving setup where no matter where you sat (inside or outside) you went to the bar to order from one of the many bartenders.  This way you didn't have a dedicated server and so you were free to move around the place.  You could migrate from outside playing some yard games to sitting at a table in the cool air conditioning.  Oh, and they also had the best IPA we've had to date.  Also delicious pizza to go with the IPA!

In this Chapter, we also explored a few caverns.  Our first cavern was Forbidden Caverns in Sevierville, Tennessee.  This was our first cavern and is still our favorite with variations of color and lots of formations along with a great cave guide.

The next cave that we explored was the mother of all caves, Mammoth Cave in Mammoth Cave National Park.  We opted for the easy, introductory tour and I actually found to be blah and too short.  However, the excitement came when a woman on the tour discovered that her purse was on fire.  Yikers!  That's no joke.  Her purse was actually on fire while we were deep in a cave two hours from any help.  The park ranger (who looked like he was 16 years old to me) reacted quickly grabbing the purse and the woman and expedited their exit from the cave.  We never saw either of them again, but we could smell the putrid odor of burnt plastic for the rest of the tour.  Next time we visit Mammoth Cave National Park, we'll opt for a more extensive tour.

The natural entrance to Mammoth Cave

The last cavern that we explored was Diamond Caverns in Park City, Kentucky.  This was also a very good tour and our second favorite.  The tour was about an hour and a half long with a couple of very narrow passages.  Cool!  The cave guide had a dry sense of humor that worked and the cave itself was spectacular.

If you're in the area, we highly recommend touring Diamond Caverns in Park City, KY,

This Chapter also brought us the best and worst campgrounds we've experienced so far in our travels.  The best (and this was a hard choice) was Camp LeConte in Gatlinburg, Tennessee.  Just a couple of years ago, this campground was abandoned and in terrible condition.  Then a young couple who are starting a family bought the property and have done wonderful things with the campground.  Their personal touches are all over the place and its location close to downtown Gatlinburg can't be beat.

The worst campground that we've ever stayed at was an easy choice for us and was Bear Cave in Buchanan, Michigan.  This campground was part of the Thousand Trails club that we joined and was absolutely horrible.  It looked like no one had done any real maintenance in years.  The place was gross and falling apart all around us.  We selected this campground because they had a cavern that we wanted to see, but after seeing the condition of the campground, we decided to skip the cave tour.  If you can, avoid this campground at all costs.

All that in just one chapter of our adventure.  And I didn't even mention all the great people  we've met along the way.  Writing this makes me kind of sad that it's ended, but I'm really looking forward to planning our next chapter.  What will it be?

You can click the map below to launch an interactive map of our Northward Push Chapter, but be patient since it can take a little while to load (about 15 seconds). 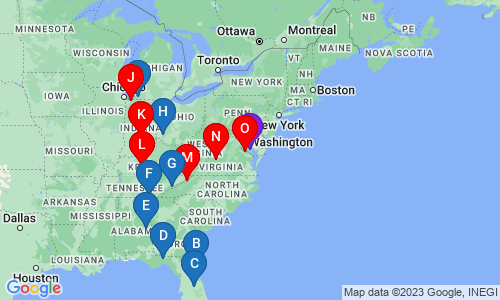